Tarvisio, Italy (31 January 2017) –  The Para Alpine Skiing World Championships have finished on a high for the New Zealand team with Adam Hall earning a bronze medal in Slalom on the final day of racing in the Italian resort of Tarvisio. The result brings the medal tally to three with Corey Peters earning silver medals in the Downhill and Super-G last week.

“It was definitely a great way to finish and I’m really happy to walk away with a World Championship podium in Slalom,” says Adam.

With more than 100 of the world’s best skiers lining up for the start with their focus on qualifying for the PyeongChang 2018 Paralympic Winter Games, the World Championship races have been hard fought.

“It was a tight race out there today,” explains Adam. “I was second after my first run by just over three tenths of a second.”

Austrian skier Thomas Grochar stormed through on his second run pushing the Kiwi back into third place. France’s Arthur Bauchet claimed the win by 0.94s.

Cardrona NZ Para Alpine Ski Team members Adam Hall and Corey Peters will now enjoy a short break before competing at World Cups in Japan from 5-7 March. They will then travel to Korea for the World Cup finals which will are being staged in PyeongChang from 9-18 March with exactly one year to go until the Games.

“We’re excited about the progress we’ve made and all the hard work which lies ahead,” says Adam Hall.” 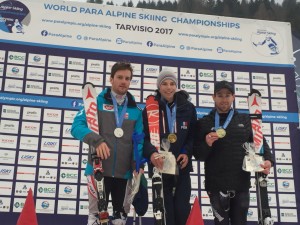