Multiple X-Games medallist Alex Ferreira’s strategy to “go as big as I can, keep it clean and go for big grabs” paid off with his first run score of 92.60 earning him the top qualifying spot.

NZ’s Nico Porteous followed closely behind with a first run score of 91.80 for second qualifying spot, impressing the judges by maintaining good amplitude all the way down the pipe and throwing two of his biggest tricks – back to back double cork 1260s – right at the bottom.

Older brother Miguel, made it through to finals in fourth with Olympic bronze medallist Kevin Rolland (FRA) separating the two brothers in third.

The home crowd were delighted to see Beau-James Wells back in action after a long injury break and squeezing into finals in tenth place.

“Those were my first competition runs for a year and a half and it feels pretty good to be back into it,” said Wells.

Ferreira took things up a notch for finals. The last man to drop into the pipe, his first run score was already the winner but he decided to go for a victory lap and landed what the judges called “the most complete run of the day” scoring a 93.40 for technical, well executed tricks and huge amplitude.

“I’m just super happy to land it,” said Ferreira. “I was just going for big air and good clean grabs, just good smooth skiing, something for the spectators.”

Kevin Rolland was also looking to up the ante on his second run but couldn’t quite nail the landing and had mixed feelings about finishing with World Cup silver.

“I’m stoked because I didn’t ride well during the training but I put down a run in finals so I’m really happy,” he said. “I’m a bit sad because my second run was a good start but I didn’t land it, and I think I can win with the second run if I land it. But New Zealand is the first competition of the season and I’m here so I’m stoked.”

Canadian Simon D’Artois was happy to be rounding out the podium in third. “The highlight was just putting it all together and finishing strong, I’m really happy I was able to do that,” he said.

Nico Porteous decided that World Cup finals was a good place to pull out a brand-new competition run and wowed the crowds with a left double cork 1440 on the first hit. He was penalised for a missed grab and then a hand drag on the final hit but left no doubt that this could be a top scoring run with the execution tidied up.

“I absolutely couldn’t be more stoked. It’s the first time I’ve landed that run in competition, first time I’ve ever brought out two of those tricks. It’s a pretty big run for me and I’m definitely happy to put that down to my feet,” said Nico.

In an international field stacked with Olympic, World Cup and X Games medallists, the women’s  final was always going to be a good showdown. After a two-run final, top honours went to Canada’s Cassie Sharpe with Estonia’s Kelly Sildaru earning the silver medal and France’s Marie Martinod bronze.

Hot off the back of her win in the World Cup Slopestyle held at Cardrona Alpine Resort last week, 15-year-old Kelly Sildaru charged into today’s competition with a first run score of 90.20 points which would have her sitting top of the scoreboard after the first run. Cassie Sharpe posted a first run score of 85.20 but by boosting her amplitude and cleaning up her grabs on the second run was able to overtake Sildaru and claim the gold medal.

“I knew what I had to do,” said Sharpe. “Kelly came out there with a really strong run, I just wanted to boost, get all my grabs and get ahead of her because she had a great run. I’m stoked, the judges saw what I was trying to do and I’m really, really happy.”

“It can be better,” said Sildaru of her runs. “I didn’t get the grab on my last 9 and now I need to work a bit more with amplitude.”

“I didn’t ski well. My first goal is to ski well, that’s what I’m proud of when I can do it. I have some cool tricks but the execution wasn’t good. Luckily, I’m still going high so I have a little advantage on some of the girls but this definitely won’t be enough for the rest of the season. There’s plenty of work still in front of me. I’m happy with the podium but I can do so much better with my skiing.”

The Audi quattro Winter Games NZ freeski events are jointly sanctioned by the International Ski Federation (FIS) and the Association of Freeskiing Professionals (AFP). They provide a valuable opportunity for skiers from around the world to earn qualifying points for the Olympic Winter Games which will take place in PyeongChang, South Korea in February 2018. 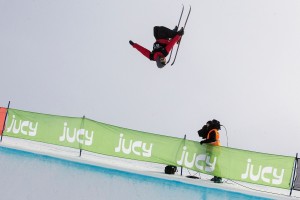