Bokwang Phoenix Park, KOR (16 February 2017) – NZ freeskier Nico Porteous has claimed a top 10 spot in the halfpipe qualifications for the PyeongChang 2018 Olympic test event staged at Bokwang Phoenix Park, taking him through to the final rounds of the World Cup to be staged on Saturday 18 February.

With Olympic qualifying on everyone’s mind, and the who’s who of the sport all in attendance, competition was fierce and the smallest mistake enough to take even the top players out of finals contention. Sochi gold medallist David Wise (USA) scored an 84.6 but this would only put him into 11th place and therefore out of the running.

“My goal for the day was to make top 20 and meet the Olympic Qualifying requirement,” explains 15-year-old Nico Porteous.

“In my first two World Cups (Copper Mountain, December 2016; Mammoth Mountain, February 2017) I made some rookie mistakes and I wanted to prove to myself I could do better. The pipe had a good shape and the two days of training had gone well. I landed back to back double 12s for the first time yesterday in training so felt good about things going into today. My first run probably scored better than expected because it wasn't clean but because I had a score on the board we decided to try a new comp run with the back to back doubles.”

“I'm really pleased to make finals,” says Nico. “I have grown up watching these guys and on Saturday I'll be standing with them and learning what finals skiing is all about. I'll be trying my best and I'll be happy with that.”

Torin Yater-Wallace came out on top of the pack ahead of his US teammate Alex Ferreira and Noah Bowman of Canada rounding out the top three.

Live brackets for qualifications and the finals will be available HERE: 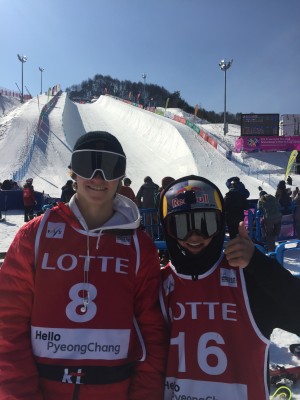