Two of the four Kiwi halfpipe men, Nico and Miguel Porteous, have qualified through to the men’s freeski halfpipe finals to be held on Saturday.

World Champion Nico will head into the finals as the second seed, dropping a 90.50 in his second run after overcoming some early jitters.

“I had some nerves during the first run, coming into the second run I knew what I had to do and felt more comfortable. I just really gave it my all and it worked out.”

Older brother Miguel qualified in ninth place. “I am really happy with how I skied and I can’t wait to get to show you some more in finals.”

Nico and Miguel shared the sentiment of how special it will be to compete in an Olympic final with your brother, with Miguel saying “I couldn’t ask for anyone better to be in finals with, I can’t wait to ski again with Nico in the finals on Saturday.”

Ben Harrington (Wānaka, 20) was sitting in the bubble spot going into run two. He threw everything he had at his second run, but unfortunately took a heavy crash on his final hit. Harrington stood up and walked away from the crash, a testament to the toughness and bravery of the young Kiwi.

“I’m okay and the body’s okay,” said Harrington. “I’m super bummed to not make finals but I’m gonna come back with a vengeance next time.”

The youngest NZ Team member Gustav Legnavsky (Wānaka, 16) was the final member of the kiwi quartet to drop in today.

“I put it all on the line, today wasn’t my day, I didn’t quite get there but I will next time.”

A bittersweet day for the Kiwi freeski halfpipe contingent, tune in at 2.30pm NZT on Saturday the 19th of February to see team Porteous throw down in the finals. 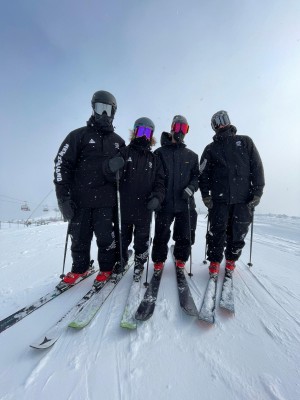