Competing under blue skies with little wind, Legnavsky asserted his dominance from run one of the three run final, with technical skiing and huge amplitude.

Although he was sitting in the top spot dropping in run two, Legnavsky didn’t hold back. He laced together a fantastic run, including three different double corks, a switch left double 1080, a left double cork 1260 and a left alley oop double 900 on his final hit.

This was the first time Legnavsky has landed the left alley oop double 900 in competition. He was rewarded a huge 96.00 by the judges for his second run, a score which remained untouchable for the remainder of the competition.

Matthew Labaugh and Ben Fethke, both of the USA, rounded out the podium in 2nd and 3rd respectively.

A fantastic result to wrap up a huge season for 16-year-old Legnavsky. Just three weeks ago Legnavsky was competing at the Beijing 2022 Olympic Winter Games as the youngest athlete in the field where he finished in 19thposition. 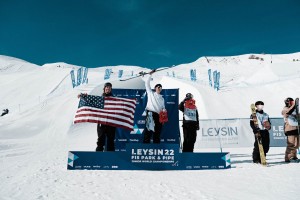