NZ Paralympians Adam Hall and Corey Peters were amongst a small international field of 22 competitors to compete on the Outwide course at the Rocky Gully Arena.

Adam, who specialises in the Slalom discipline, looked at home attacking the tight technical course and stopped the clock on 42.31s to lead the men’s standing field after run one.

“It’s a quick course, you need to be smart with the entry and exit for those tight combinations (of gates). I felt pretty aggressive in my run, I just need to keep attacking and reducing any mistakes,” he explained.

Corey Peters was the first of the sit skiers to take to the course, posting a fast first run time of 43.98s. When main rival Tyler Walker of the USA posted a DNF immediately afterwards it looked as though the pressure might be off the Kiwi. However, last skier to run, Korean Sang Min Han, had other ideas, speeding through the finish to match Corey’s time of 43.98s and hold the joint lead after the first run.

The Korean Paralympian won a silver medal in giant slalom at the 2002 Paralympic Winter Games. Although he has not competed on the IPC circuit in recent years, podium results in both the Slalom and Giant Slalom at IPCAS Southern Hemisphere Cups Slalom held on Monday and Tuesday as part of the Audi quattro Winter Games NZ suggest that he is still one to watch.

Run two got underway after a course re-set, with run order reversed so the fastest racers were last to take to the gates.

When Australian skier Mitchell Gourlay - second after run one - made an error and skied out of his second run, Adam Hall’s gold medal in the standing category never really looked to be under threat. The Kiwi skied home for the win in a combined time of 1:26.76, second placed James Stanton (USA) over six seconds back in a time of 1:33.31s and Great Britain’s James Whitley third in 1:34.10s.

“The second run was a lot better than the first and I was able to give more oomph,” explained Adam. “The course was full of different combinations of gates and that worked well for me. I’m happy with my performance and happy with where I’m at with my training. Now it’s about getting stronger and stronger and building progression.”

The technical course set found less favour with the sit skiers and the attrition rate was high. Corey Peters and Sang Min Han were the last two racers in their category but neither was able to make it through the course, Corey straddling a gate in the mid-section and posting a DNF.

Patrick Jensen (AUS) was the only competitor in the men’s visually impaired class and finished in a time of 2:07.71s. Melanie Schwarz (USA) competing in the women’s standing, was the only female competitor to finish two runs and posted a combined time of 1:56.35s. 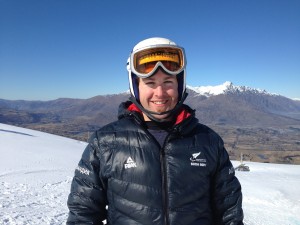