Kuhtai, Austria (22 December 2017) –New Zealand Paralympian Adam Hall (Wanaka) has won gold at the last World Para Alpine Skiing World Cup of the year, claiming the fastest overall time in the men’s standing Slalom in Kuhtai, Austria. The result comes off the back of his silver-medal winning performance yesterday.

Hall won the men’s slalom standing with an overall time of 1:43.19. Neutral athlete Alexander Alyabyev (1:44.14) and Sweden’s Aaron Lindstrom (1:44.14) shared the second place as they clocked the same overall time.

“It was another great day of racing, going one better than yesterday” said Hall. “I have had four pretty consistent race runs over the last two days and performed pretty well. It has all really worked out how I had imagined. When that happens it’s all pretty special.”

With the 2018 Paralympic Winter Games only a few months away, Hall says these results provide a valuable performance benchmark.

“It’s been great to get this benchmark early in the season and leave Europe with a bit of a statement. We will fly away from Europe having learned a lot and will continue to work on even better performances heading into the games."

PyeongChang 2018 will be Hall’s fourth Games.  He will be joined by Para skiers Corey Peters (New Plymouth) and Aaron Ewen (Auckland), and para snowboarder Carl Murphy (Wanaka). The Games take place from 9-18 March. 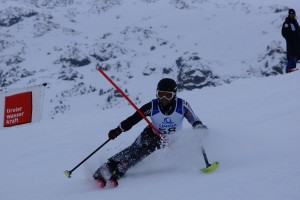