Kiwi snowboarding phenomenon Zoi Sadowski-Synnott (Wānaka, 21) has added yet another win to her season, taking the top spot at the TAE Natural Selection at Baldface.

Sadowski-Synnott arrived at Baldface Lodge in British Columbia just days after the Beijing 2022 Olympic Winter Games. Scary Cherry, a steep slope in the Baldface Lodge tenure, is a freerider’s dream with 80 massive natural drops, kickers and other features spread throughout the famously powder coated, 40°-plus slope.

The format consisted of a semi-final, with the top two women advancing through to finals for a head-to-head matchup where the best run wins the stop.

In the semi-finals Sadowski-Synnott worked her way through the variable snow at the top of the venue, finding her stride further down where the snow changed to blower powder. She went huge in her second run, throwing a massive wildcat off one of the larger features but unfortunately came unstuck on the final feature, relying on her run one score to carry her through to the finals.

Heading into the finals in the top spot, Sadowski-Synnott went head-to-head with Elena Hight. At this point in the event the snow was beginning to get tracked but Sadowski-Synnott linked together some huge features in the bottom half of her run, retaining that top spot.

The final rider to drop into the finals, Sadowski-Synnott knew she had claimed the top spot and was able to drop in for her victory lap. In classic Sadowski-Synnott style she didn’t rest on her laurels, rather she threw down with a frontside 360 and stomped a huge wildcat. She was rewarded with her top score of the day for her efforts, a 90.00.

The commentators were impressed with Sadowski-Synnott’s riding, saying “She is nothing short of explosive, every time she drops in, she impresses in a really incredible way.” 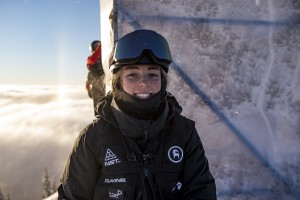