Two separate downhill races were due to take place on Thursday and Friday. However, due to some predicted poor conditions, the schedule was changed and the first speed events of the para alpine skiing World Cup season were held within a few hours of each other.

Peters, who is the current World Champion for Downhill and Super-G, skied a strong first race, winning by 0.05s ahead of the USA’s Andrew Kurka and Canada’s Kurt Oatway. The second race of the day was held in flat light conditions but Peters was looking good for another win, knifing through the top half of the course and holding first place at the first interval time check. However, a slight miscalculation saw him hit a bump and crash out of the course.

Nonetheless, Peters considered it a “successful World Cup race and a good gauge of where I’m at after limited racing since March last year.”

Cardrona NZ Para Alpine Ski Team mate, Adam Hall, also had a good day on snow. Hall, who is a technical specialist and only recently began competing in the Speed disciplines, came away with fourth and seventh place finishes in the men’s standing category. Paralympic champion Markus Salcher (AUT) won both races.

Due to the schedule changes, the Innerkrems World Cup will now continue on Saturday (14 January) with two super-G races. Competition will conclude on Sunday (15 January) with the super combined.

Live results are available throughout at: https://www.paralympic.org/alpine-skiing/live-results.

The World Cups offer skiers the chance to hone their skills ahead of the 2017 World Championships and to gain valuable qualifying points for the 2018 Paralympic Winter Games.

The 2017 World Para Alpine Skiing Championships get underway in Tarvisio, Italy, on 22 January, featuring 140 skiers from 30 countries in the last major competition ahead of the PyeongChang 2018 Paralympic Winter Games 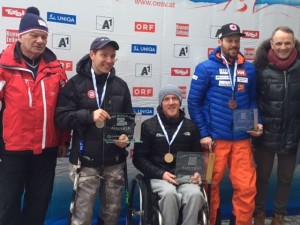