The Para athletes have had a frustrating start to their northern hemisphere competition season with heavy snowfalls leading to the cancellation of what was due to be the first 2017/18 World Cup in St. Moritz, Switzerland, on 13 December.

With little opportunity to train prior to the event, Hall was delighted to ski two solid runs in today’s Slalom and finish on the podium.

“After two weeks of not being able to race it was good to finally get a solid Slalom race in my pocket and finish with a pretty decent result,” said Hall. “We have worked really hard over the last Kiwi season both off snow and on snow so it’s satisfying to see this progress into positive results.

"It's been good to put our feelers out and see where I stand early season. I race again tomorrow and will continue build up to the games with what we need to do."

Adam Hall will be back in action this evening (NZT) for the final race of The World Para Alpine Skiing World Cup Slalom in Kuhtai. 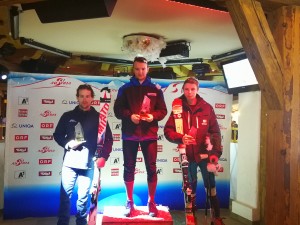