There was no dampening the spirits of New Zealand’s young ski racers, excited to get their race season underway this weekend despite some challenging weather conditions.

The first event in the Southern Junior Interfields Ski Race Series took place on Saturday 18 July with 170 skiers in U8 – U18 age categories competing on the technical Kombi course set on Coronet Peak’s Rocky Gully.

Snow began falling just as the younger competitors took to the gates and became steadily heavier so that visibility for the last competitors was reduced to one or two gates ahead and race organisers were forced to call it a day after the entire field had completed only one of their two runs.

The young racers proved themselves a hardy bunch and up for the challenges of both the course and the weather, with some interesting tussles unfolding across all the age groups.

From Wanaka’s Kezik Magill claiming a 10.90 second lead in the U8 boys’ age category to the 0.21s separating Clara Albert (Queenstown) in first place and Alice Robinson (Queenstown) in second place in the U16 women’s age category, these opening results come with the promise of an exciting season ahead.

The next event in the Southern Interfield Series will be held at Cardrona Alpine Resort on 2 August while Ohau will host an Interfield race on 26 July as part of the Canterbury series.

A similar story of inclement weather putting paid to race schedules also unfolded at the National Points Series races at Mt Hutt over the weekend. Slalom racing went ahead on Saturday but could not be run on Sunday.

Team Hutt’s Georgia Bushell, racing in U18 this year, was the fastest on course, dominating the field with her combined time over two runs of 1:24.82s. 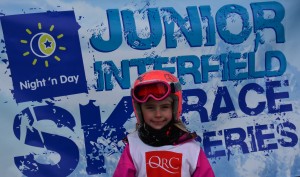