Wanaka ski racer Ben Richards is in Canada for the Whistler Cup, one of the largest and most important junior ski races on the international calendar. The Whistler Cup has launched the ski careers of many World Cup champions and attracts entries from the skiing power house nations of Europe as well as North America. Ben pushed through injury to finish second in the U16 Super-G on day one of competition.

“I'm really happy to be on the podium today," says Ben. "Conditions were perfect with beautiful blue sky but the shadows from the trees made it difficult to see properly. The run was set a bit tighter than I'm used to for Super G. I have a ruptured abdominal muscle so this made it more challenging so I was happy to finish.”

After a DNF in the Slalom on day two, Ben came back fighting for the GS on the final day of racing. He was leading after the first run, a second ahead of two Norwegian racers, but starting in 30th position for the second run, the soft, bumpy conditions proved too hard on his ruptured muscle and Ben lost a little time. However, his determined efforts still saw him hold on for third and finish on the podium.

Meanwhile, Queenstown racer Alice Robinson put together an outstanding performance at the USSA U16 Nationals at Snowbird Resort. She won the Giant Slalom and placed second in the Super-G.

“Alice has achieved some truly amazing results at the US Nationals and we are thrilled for her,” say Snow Sports NZ Alpine Manager, Hannah Hazeldine. “The results are all the more impressive given that Alice is only in her first year of U16 competition. She has another year competing at this level and is amongst the youngest of competitors in the field. The standard of racing is very high and the field included the entire US U16 National Team.” 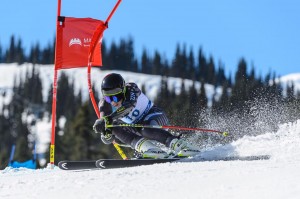