Under a blue bird sky and facing excellent conditions on the high-speed course known for its very steep start section, Campbell says, he had “the most amazing day of racing I could have hoped for at my first World Cup.”

18 year old Campbell was one of the youngest competitors in the 60-man field which included Olympic silver medallist Nikolay Olyunin (RUS), who finished second, and 2015 World Championships runner-up Kevin Hill (CAN) who finished third. Lucas Eguibar (SPA) took the win.

“After a couple of passes and a couple of seized opportunities I ended up taking 10th, I'm so stoked,” explains Campbell.

“I’m happy that I rode well but there are a lot of things to learn from.”

Duncan will now prepare for his next World Cup which will be held in La Molina, Spain from 20-21 March. 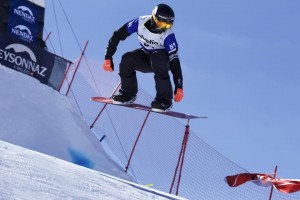