Cardrona, New Zealand (16 August 2018) – Competition moved to the halfpipe at Cardrona Alpine Resort today for the final event in The Spy Optics FIS NZ Freestyle Open.  Heavy snowfall meant that the competition had to be modified to a straight two run final, and the podium placings went to those who could put the weather challenge aside and still pull a solid run out of the trick bag.

In the men’s ski division the top three men all spun 900s despite the tricky conditions. Britain’s Sam Ward stomped a big cork nine tail grab out of the start gate and maintained his amplitude with big spins on both walls of the pipe for the win.

“I was looking for redemption after falling on the first hit in the slopestyle,” he explained.

“I just tried to push through the weather today. I adapted my run and changed up which tricks I did on which hits. I think landing both way 900s was a highlight.”

Korean athlete Kangbok Lee finished in second, bookending his run with a big cork nine tail grab out of the gate and a cork 1080 – the biggest spin of the day for the skiers – on the final hit.  GB’s Sam Gashin was third.

A young Kiwi contingent laid down some solid runs to finish in the middle of the pack. 12 year old Gustav Legnavsky was fifth, Max McDonald (14) sixth and Luca Harrington (14) seventh.

Also skiing for Great Britain, Zoe Atkin put her nerves aside and boosted out of the pipe on her very first trick.

“I just decided I had nothing to lose,” she said.  “I really liked my first hit, it was higher than I thought and I got really excited.”

From there Atkin laced up the win with a right 360 set up in to a switch spin combo of switch left 5 to switch right 3, all grabbed.

“I’m really excited I didn’t expect it (the win) at all,” she said.

Korea took a clean sweep of the men’s and women’s snowboard podiums. Kwang Ki Lee was the clear winner in the men’s field and the only rider to stomp a clean second run in heavy snowfall.

The judges took their hats off to Lee who seemed to have no concerns about the weather conditions and put down two huge spins (900s) and made clean landings on every trick.

Leejun Kweon in second and Joon-Sik Lee in third also had some big tricks but lacked the clean execution needed for first place. As the top placed U18 rider Joon-Sik Lee also claimed the win in the World Rookie Tour division.

13-year-old Zephyr Lovelock was the best of the NZ male snowboarders, finishing in fifth place.

Minju Lee was delighted by her win in women’s snowboard, albeit only against one other competitor.

“It was really fun,” said Lee.

Second place women’s snowboard was awarded to Na-yoon Lee who, as the top placed U18 female, also topped the World Rookie Tour division. 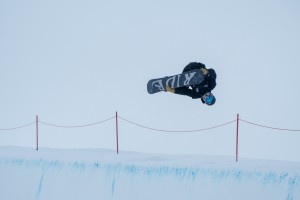