Snowboard’s heaviest hitters put on a spectacular show in the qualifying rounds of the men’s halfpipe today in PyeongChang. 19-year-old NZ rider Rakai Tait was gunning for a spot in the finals but was unable to land his two runs and finished outside the top 12.

“Go big, that was the goal,” said Rakai. With that in mind he started off run one with a massive backside air, launching 5.3m above the lip of the pipe, the greatest amplitude any New Zealand snowboarder has recorded in competition.

All looked to be going to plan as Rakai linked together a combination of frontside 720, cab 720, frontside 900 and finished his run with a frontside double 1080 but slipped out on his heal edge and fell over.

“I was hoping to make finals and put down a solid run out here,” he said. “I just couldn’t put down the last trick. I think I would have pulled it off if I could have landed that last trick.”

Putting disappointment aside, he headed back to the top of the halfpipe ready to push for an even harder run on his second attempt but came unstuck on his third hit.

“Not landing is obviously a bummer,” he said, “but I’m pretty stoked with my riding.

“The level of riding is crazy and it’s really cool to be amongst those guys.”

Double Olympic champion Shaun White (USA) earned the highest score of the day with Australia’s Scotty James and Japan’s Ayumu Hirano also vying for the top qualifying spot which would put them in a good strategic position as the last rider to start in the finals.

Of his Olympic experience, New Zealander Rakai Tait says, “It’s been amazing. The honour of representing New Zealand and wearing the fern has been incredible and all the support from all the different communities that I’m a part of has been unbelievable.” 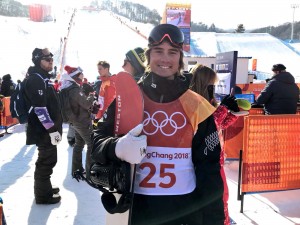