Podium for Christy Prior at 2014 Burton High Fives

Lake Wanaka, New Zealand (19 September 2014) Seven New Zealand athletes were in action at Cardrona Alpine Resort yesterday for the slopestyle finals of the 3rd annual Burton High Fives presented by MINI. In the women's field Olympians Christy Prior, Stefi Luxton, Shelly Gotlieb and Rebecca Torr were all excited to be competing in the first snowboard competition of the NZ season. Flying the NZ flag in the men's field were Ben Comber and up and coming athletes Carlos Garcia Knight and JJ Rayward who both had strong results during the northern hemisphere season and were also eager to show their potential in their home country.

Christy Prior was the top performing Kiwi athlete, scoring a third place finish. Olympian and two-time Burton High Fives winner Jamie Anderson (USA) and Emil Ulsletten (NOR) walked away with the titles, and $2,500 USD each.

Over the last four days, sixty of the world’s top snowboarders have experienced a snowboarding event like no other in New Zealand, competing in world-class snowboarding events and classic kiwi-inspired off-snow team activities. On Monday, riders were treated to an adrenaline-filled afternoon of activities at the Oxbow Adventure lodge, followed by a fantasy draft team selection auction where it was announced the team with the most points at the end of the week will walk away with $70,000 USD, or $7,000 to each rider. Teams had a blast on Tuesday at the MINI Off-Road challenge where they had the opportunity to bond while driving MINI Countryman Cooper S All4 vehicles around a muddy, off-road course. Yesterday, after a morning practice session for both men and women, the Burton High Fives slopestyle finals got under way with the best of two runs format, which allowed for an exciting competition in spite of the windy conditions.

While strong winds threatened to deter riders during both the men’s and women’s competitions, athletes charged through the course regardless of the weather. In combination with the unique course, fans witnessed incredible snowboarding all day long. Competitors were faced with navigating through back-to-back wall ride MINI features followed by a unique urban inspired street rail setup that left ample room for creativity. A fourth feature consisted of a cannon rail next to a giant cable reel, which was placed right before three perfectly shaped jumps that wrapped up the course created by the Cardrona Parks NZ shape crew.

Sochi gold medalist Jamie Anderson set the bar high for the women right from her first run where she linked a frontside wallride to a backside nose slide into a backside tailslide, 50-50 backside 180 out off the cannon rail into a cab 540, frontside 360 and a huge back side 540 to finish with a 94.00. Taking second place was Burton rider Miyabi Onitsuka (JPN) who scored an 87.80 on her run that included a highly technical cab 270 boardslide to regular through the tricky rail section. New Zealand local and team captain Christy Prior (NZL) rounded out the podium with a run that showcased her signature front side Rodeo 540 and earned her an 86.80.

For the men, Emil Ulsletten (NOR) set the tone on his first drop with a run that included the perfect mix of style, technicality and variety to give him the win with an 88.40. Emil started off with a 50-50 to boardslide to fakie, followed by a switch tailslide 270 out from off the top of the second wallride. Coming through the rail section he continued with a cab 270 boardslide to fakie into a huge frontside bluntslide 450 off the cannon rail, followed by a frontside 900, switch backside 1260 and a rarely seen frontside Rodeo 1080. Young Burton rider Darcy Sharpe (CAN) closed in on his second run to land on his feet for second place with an 85.20, while Yuki Kadono (JPN) took third with an 83.40.

Notable mentions go to three Burton riders. First up, Mikey Ciccarelli (CAN) narrowly missed out on the podium by coming in fourth place. Halfpipe specialist Chloe Kim (USA) had an impressive fifth place finish outside of her comfort zone with a switch backside 180, and Ben Ferguson (USA) threw down a flawless backside rodeo stalefish that proved he isn’t confined to the halfpipe either.

The Burton High Fives will wrap up today with halfpipe finals where Burton riders Taku Kiroaka (JPN) and Ayumu Hirano (JPN) will look to repeat their 2013 Burton High Fives Halfpipe podium finishes. The final results will also determine which team will equally split the $70,000 USD team award. For the full list of results, highlights from the team competitions throughout the week, and current team standings, head here. For the complete list of teams, head here. For real-time event news, follow the hashtag #BurtonHighFives.

To catch all the action, watch the webcast on www.burton.com/HighFives, with slopestyle coverage starting at 8:00 PM (NZST) tonight (September 19th), and halfpipe coverage starting at 8:00 PM (NZST) tomorrow (September 20th). To optimise viewing times for fans around the world, the webcast will air delayed with multiple re-broadcasts based on time zones and include rider interviews and bios, as well as full replays for on-demand viewing at any time. Also be sure to check your local TV listings for the 2014 Burton High Fives highlight show, which is scheduled to air in the U.S. and around the globe later this fall. 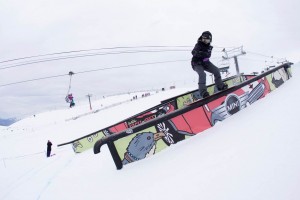