Leogang, Austria - 30 January 2013 – It has been a busy few weeks for the New Zealand Ski Race team with races in Switzerland, Germany, Austria, and Slovenija. Adam Barwood (Queenstown) is enjoying the packed schedule and has responded with some career best results.

Heavy fog made for tough race conditions in Stari vrh, Slovenija on 23rd January; this didn’t deter Barwood, however, and he managed a personal best result in the slalom race, scoring 32.78 points.

From Slovenija Barwood moved on to Hinterstoder, Austria where he made a podium result in a University Race coming in second in the slalom on 24 January.

“Good snow and weather conditions made for a fast course,” Barwood reported. “After the first run I was in first place.  I didn't ski quite as well in the second run but I managed to place second overall, just .16 behind the winner.”

Barwood is now back at home base in Leogang, Austria for training before heading off to Switzerland for Super G races in Brigels.

Prebble reports: “After making it through qualifications, in the first round of finals I won my race after a solid run. In the second round I had a duel with two other Swiss skiers and got squeezed out on a jump feature and managed to fend off a Russian, having to settle for third.” 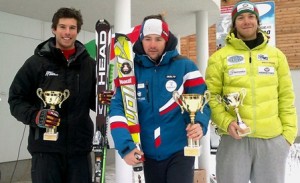