Ski cross racer Jamie Prebble placed 25th finishing 1.74s off the leader, in this morning’s seeding rounds before being eliminated in the 1/8 final in the afternoon. He was the third racer across the line, with only the top two progressing to quarter finals.

“I’m pretty disappointed,” he said. “I came here to stand on the podium and win a medal and just didn’t have the speed.

“I wasn’t very happy with my seeding round. I had a bad mistake which cost me. I came up short on a double and that cost me a bit of speed. But at the end of the day it’s about the final.

“It’s not an easy course, it’s been a battle but I was confident and I knew what I had to do and was excited at the start gate but didn’t quite have enough speed today.”

“It was tough,” he said. “I had a tough heat. The three guys are top three in the world cup standings. I was in the race and dropped off a few things here and there. In this whole field, everyone is super close. The level is amazing.  When you are all literally within a second on the day it’s those little things that you have to put together. If someone nails that one section better then that’s the difference in beating your competitor.” 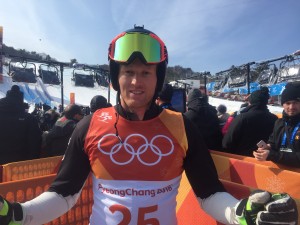