The FIS Freeski World Cup was back in business this week at the world-famous Stubai Zoo snowpark in Austria, with the first slopestyle competition of the season. NZ's Finn Bilous achieved a solid result, finishing in eighth place.

Initially scheduled for Saturday, the finals in Stubai had been moved to Friday following the unfavourable weather forecast. The jury had made just the right decision as mild temperatures and perfect conditions played along to provide a truly top-tier show for the top 18 men selected through the qualification round on Thursday.

After landing his first run with a small mistake on the rails, Finn  decided to change things up for run two in an effort to really up the score but came off the rails  early on his second attempt and his initial score of 83.88 would be his best.

Disappointed not to land his second run and push for a higher placing, Finn was nevertheless happy to have achieved a solid result -  just five points off the winner - in his first slopestyle competition since March.

The first place on the day went to the veteran Henrik Harlaut (SWE) who proved to be the most consistent rider of the day, stomping both of his runs with ease and style, squeezing in a nice combination of a switch left triple 1260 to a right dub 1260 on the jumps and an extremely smooth rail section for a final score of 88.88 points and his first slopestyle World Cup victory.

The second place went to the US rookie Mac Forehand with Ferdinand Dahl (NOR) finishing the competition in third. 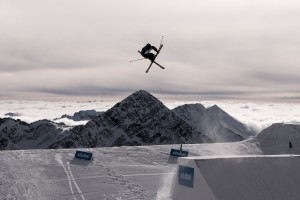