Panorama, BC, Canada (20 December 2012) - Members of the New Zealand Ski team have recently wrapped up a week of competition at the Nor-Am Cup in Panorama, British Columbia. With only a few weeks’ training time in the bank, results were mixed and disappointing for some.

Struggling with his skis, and after a fall in warm-up which left him with strained tendons and bruising in his left wrist, Ohakune’s Ben Griffin was unable to put together a strong performance.

“Today was a GS Nor-Am in which I went back to the 27cm skis. Everything felt awkward on them after working on the 35s recently, and I skied pretty awfully – hipping out about three quarters of the way down the first run.”

Nick Prebble was the strongest performer, coming close to cracking the top 30; a goal for the team and which would allow him to collect Nor-Am points.

Adam Barwood was also consistent, finishing all of his races but unfortunately without any spectacular results.

Finlay Neeson enjoyed more positive results at the FIS event in Jackson Hole, Wyoming where he placed second in the Men’s Giant Slalom.

Racing continues with the FIS series at Panorama this week and the team are looking forward to improved results. 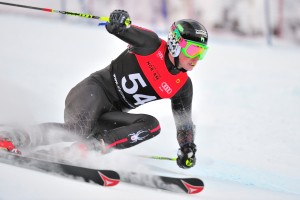