Miguel Porteous Through to Freeski Superpipe Finals at Dew Tour

This year’s Dew Tour at Breckenridge Ski Resort is an Olympic qualifying event for U.S. free skiing and snowboarding, as well as for Canadian snowboard slopestyle.

Twenty-four skiers were  cut to 12 during Men’s Superpipe Qualifiers. Porteous placed ninth with a score of 82.66.

"The heat was pretty stacked being the second Olympic qualifier for the Americans," explained Miguel.

"I had a good training in the flat light so that always helps going into the comp. Unfortunately I didn’t land my first run so had a little pressure on for the second and thankfully it went well."

David Wise (USA) came out strong with two of the highest scoring runs of the day, notably a 93.33 point run, which ended him in the top position going into the final. Alexander Ferreira (USA) ended with a 89.66 and Torin Yater-Wallace (USA) 88.33 making a clean U.S. sweep.

Beau-James Wells opted to sit out competition after crashing during training and suffering some bruising.

Snowboarder Zoi Sadowski Synnott missed the top eight cut off in the women's snowboard slopestyle qualifiers, finishing in 10th place from the field off 22 riders. 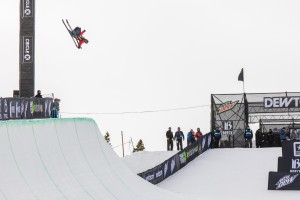