Adam Hall is all set to defend his standing slalom title in the 2014 Sochi Paralympic Winter Games in Russia.  Should he do so he will have a large army of support staff to thank for what has been a carefully engineered four-year plan.

If ever a story epitomised the virtues of Kiwi hard work and ingenuity it is that of Adam Hall.

Four years ago, at the Vancouver 2010 Paralympics, the then 22-year-old survived a mid-race fall in his second run to dramatically strike gold in the standing slalom event.

At that time, the man who was raised on the family’s dairy farm in Outram on the Taieri Plains, lauded his success as a victory based chiefly on perspiration. This time around should he mount a successful defence of his title he hopes a large dollop of inspiration will have proved decisive.

“I believe Vancouver was achieved on hard work and a good Kiwi attitude,” explains Adam of his 2010 triumph. “Yet after Vancouver we looked at my body and discussed what we needed to do to be able to continue for another four years. The training hasn’t changed too much, just the way we have gone about it. We still work hard but we are a lot smarter in our thinking.

In short, the South Islander has taken on board another Kiwi trait familiar to many – ingenuity.

Working with a large and talented support team, Adam has left no stone unturned in his quest for gold. Video analysis, strength and conditioning, nutrition, biomechanics and a variety of others areas have been closely scrutinised in an effort to trim those extra hundredths of a second so critical on the mountain.

It is the appliance of science with a large Kiwi imprint.

“The great thing about adaptive sport is everyone is completely different,” explains Adam who was born with spina bifida. “Everyone has their own equipment to suit their own ability. That’s what adaptive sport is all about.  It is about being adaptive to your own needs.  We decided after Vancouver to go back to the drawing board, look at my body and decide what I specifically needed to go faster.”

The whole process was methodically worked through with the first step a detailed physical evaluation of Adam’s body with the help of Vanessa Trent of Precision Physiotherapy – an accredited provider for High Performance Sport NZ (HPSNZ). She assessed the Otago athlete’s strength and overall fitness with another brief to ensuring that Adam’s body would not be irreparably worn out by the demands of training.

With the detailed physical analysis of the Vancouver 2010 Paralympic gold medallist now in place the next issue was to address the question of equipment and technique married with the individual make up of Adam’s body.

One area ripe for development was the outriggers or “elbow crutches” which provide assistance with balance and propulsion out of the gate – which had barely changed on terms of their design and construction for the past 30 years.

Another area which Adam and his team believed demanded attention was his AFO’s (ankle foot orthoses) which had historically been designed to act as a support to the disability rather than allowing him to be in the optimum position to perform to his best.

Using Orthotics SI – the Christchurch-based company experienced in manufacturing AFO’s (Ankle Foot Orthoses) – a Mark 1 version was designed. However, as the normal casting process for a new AFO required Adam to be on site for each individual mould – not easy when trying to modify and with Adam’s training requirements which involves him sharing his time between Wanaka and Winter Park, Colorado.

To overcome the problem Adam’s leg was digitally scanned in 3D and a new 3D model was developed that could be used to design new supports. The cutting edge Christchurch firm ARANZ Medical Ltd – whose 3D scanning expertise helped NASA explore Mars were brought on board.

Using the very finest technology available a ‘Virtual Adam’ was created to help predict biomechanical alignment of Adam’s lower limbs. From this the splints and orthoses to support the ideal position for his legs was created.  Dynamic Composites then created a replica set for Adam’s legs as moulds.

“The AFO’S are a lot lighter than what I skied with before,” explains Adam. “They now work in a way and at the same angles of how my knees, ankles and hips flex, whereas before they worked against my body.”

Meanwhile, a new set of state-of-the-art outriggers were designed by Milton Bloomfield at Dynamic Composites – a man who had previously worked with America’s Cup team and Sarah Ulmer the 2004 Olympic cycling champion. Bloomfield and his team designed a pair of jet black carbon fibre outriggers. Although much of the science behind the outriggers is of a sensitive nature – Adam is excited by the innovation.

“My outriggers and a lot different to the traditional,” explains Adam, who will be skiing with the third upgraded design from Dynamic Composites in Sochi. “They are more dynamic and lighter and work against my shoulder. Let’s just say the technology has allowed me to work more productively on snow. The equipment now works for me rather than against me.”

Yet Adam’s drive and ambition to defend his title in Sochi has extended way beyond his equipment and technological changes.

Shifting from northern to southern hemisphere winter – this is currently Adam’s 20th successive winter – his training under the supervision of his US coach Scott Olson has also undergone an overhaul.

He has adopted a more measured, targeted approach to training, which he hopes will pay dividends in Sochi.

“I now put in some really good blocks of training and then I will back off, rather than grinding away all the time,” he explains. “It is about good periodisation and quality over quantity and getting as much out of your training as you can. When I look back at Vancouver I was probably grinding away all of the time, whereas as I’ve now become more focused on tactics and techniques. This has helped me perform to a higher level.”

His nutrition – working alongside HPSNZ nutritionist Caz Cruden - has also undergone a revolution.

He has shed 10kg in weight thanks to a combination of a well educated nutritional plan, good discipline and work in the gym and believes his current weight of 75kg is ideal to maximise speed without losing power on the slopes.

“It is about being smart around your training with protein and carbs,” he explains of his nutrition. “It is also about having replacement nutrition and being able to replenish and rebuild by fuelling the body. Being this light has helped me become more dynamic on the hill and it has helped me create a lot more angles, because the loss of fat is quite noticeable.”

Thanks to the hard, innovative and professional work put in by his team, Adam, who took up skiing aged six, goes into Sochi in good heart. Besides the slalom his specialty event – he is now a more rounded skier who also hopes to be in medal contention in the super combined (he currently has a world ranking of 18) and super-G (he is currently world ranked No.6) disciplines, too.

The competition at the sharp end has also improved. It is not seconds or even tenths of seconds that separate the top standing slalom skiers, but hundredths of seconds. Standing in his way to potentially retaining his title will be home favourite Alexey Bugaev and three-time Paralympic medallist Vincent Gaulthier-Manuel of France. Another danger will be former able-bodied World Cup super-G podium finisher Matthias Lanzinger of Austria, who suffered a leg amputation following a sickening crash and is now excelling in disability sport.

“It is going to be really competitive,” adds Adam. ‘I don’t think we’ll see what we saw in Vancouver (where Adam held such a buffer after the first leg he could even fall and get back to his feet to win gold). Many of the competitions are being decided by hundredths of second - that’s what keeps it really exciting. That is something I really thrive off.”

Yet for Adam, who tragically lost his mother, Gayle, in a car accident just one month after winning gold in Vancouver, the aim and ambition is the same as always.

“We have an opportunity (to perform at the Paralympic Games) every four years and get a chance to put in our best performance and represent our country,” he explains. “Right now, I’m focusing on the process of that then the results will follow. If I do I‘ll be rewarded with a podium spot.”

With a sprinkling of Kiwi ingenuity and a large dollop of hard work anything is possible.

Piece of equipment – My skis

Rival – Anyone from Australia 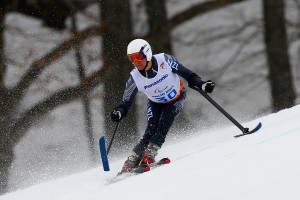