Welcome to Snow Sports NZ / News / From X Games to Freeride World Tour: a Week in the Life of Janina Kuzma

From X Games to Freeride World Tour: a Week in the Life of Janina Kuzma

Aspen, USA (21 January 2015) – NZ Freeskier Janina Kuzma today placed fifth in one of the most prestigious competitions on the action sports calendar but there’s barely time to stop for congratulations as she now boards a plane to Europe and heads to another top level competition: from X Games to Freeride World Tour in a matter of days.

Janina joined seven other invited skiers in today’s X Games superpipe event; the Kiwi was the only X Games rookie amongst the field of eight Olympians which included the full podium line up from Sochi.

First to drop, Janina says that she felt surprisingly calm. “It wasn’t like the Olympics or the recent World Cup events. I felt really calm and just ready for it. I’ve been working hard on my runs and a recent training camp in Calgary has helped me to focus. I knew the run I needed to land.”

The first run wasn’t as clean as she would have liked and lacked the necessary grabs. On the second run Janina found the grabs as well as an increase in amplitude which would lead to an extra six points on her score, putting her into fifth place. By the third run, the snow had started to fall and the pipe was running slow.

“I didn’t have the speed to spin the 900 at the end of the run and had to bring it back to a 720. It’s a bit disappointing because I know that’s the trick I need to nail in order to get on the podium. The difficulty of my run just wasn’t there compared to the top three. Still, I’m really pleased with my result at my first X Games. I wanted to be in the top five.”

X Games action continues this week with para-snowboarder Carl Murphy next of the Kiwis to compete in the adaptive snowboard cross on Friday (NZT). Byron Wells steps up for the men's ski Superpipe Elimination rounds on Saturday and Christy Prior will take on women's Snowboard Slopestyle on Monday. Jossi Wells is hoping to make his return to competition at X Games and is the alternate for Superpipe, Slopestyle and Big Air.

Janina Kuzma now flies straight to Chamonix in France to compete in the first stop of the Freeride World Tour. She is excited to be returning to big mountain skiing, a discipline in which she has enjoyed a string of top results. In 2011 she finished third overall at the prestigious Verbier Extremes in Switzerland, the finals of the Freeride World Tour. Janina has won the NZ Freeski Open Big Mountain event seven times and is a two-time Canadian Freeski Champion.

After a two year break from the Tour, Janina is waiting to see how she measures up against some of the new talent but is also excited to see some of her old competitors such as Sweden’s Christine Hargin and Austria’s Lorraine Huber back in the mix.

She is joined on the Tour by fellow New Zealanders Charlie Lyons and Sam Smoothy who finished in second place overall on the 2014 Freeride World Tour.

Freeride World Tour results and livestreaming will be available here 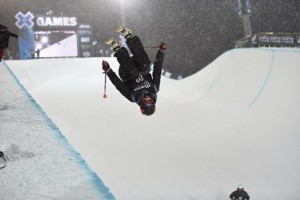