Presented by snowboarding great Shaun White, the Air+Style is a two day action sports competition. For the first time in its 21 year history the 2015 event was open to freeskiers as well as snowboarders with 32 of the world's best competing on a 16-story jump.

The Big Air event was affected by constant rain throughout the day which meant that the 16 invited ski competitors could only take three runs on Sunday and the second round and the finals had to be cancelled. Standings from round one were used as the final results and the best two of three runs were counted.

Gus Kenworthy (USA) claimed the win with a score of 86.23 out of a possible 100 points. Alex Bellemare of Canada took second with an 85.68 and Vincent Gagnier of Canada was third with an 85.39. Jossi Wells just missed out on podium spot with his score of 85.12. 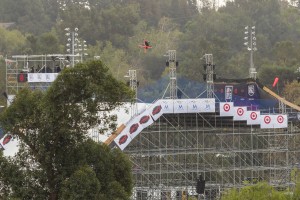