Seventeen finalists in the Para Athlete/Team, Sportsman, Sportswoman and Team categories will all be eligible for the supreme Halberg Award – the country’s highest accolade for sporting excellence.

2017 winner and 2016 supreme Halberg Award winner Lisa Carrington is a finalist again for the High Performance Sport New Zealand Sportswoman of the Year award after claiming a gold and three silver medals at the Canoe Sprint World Championships.

Carrington is joined by squash player Joelle King who won the Hong Kong Open plus two gold and a bronze medal at the Commonwealth Games, Jonelle Price who became the first New Zealand woman to win the Badminton Horse Trials followed by the Luhmuhlen event. Snowboarder Zoi Sadowski-Synnott also makes the shortlist for claiming bronze at the Olympic Winter Games.

2017 winner Tom Walsh is up again for the ISPS Handa Sportsman of the Year after a golden year winning the World Indoor Championship, Commonwealth Games and Diamond League events.

Sophie Pascoe is shortlisted again in the award category she claimed in 2017 the ISPS Handa Para Athlete/Team of the Year following a medal haul of five gold and two silver across the Pan Pacific Para Swimming Championships and Commonwealth Games in 2018.

Five teams who had outstanding successes in 2018 make the shortlist in the ISPS HandaTeam of the Year category including the NZ Football Under 17 Women team who finished third at the FIFA Under 17 Women’s World Cup and the NZ Women’s Kayaking Team who claimed silver at the Canoe Sprint World Championships.

2017 winner Gordon Walker is again up for the Buddle Findlay Coach of the Year.  Walker is joined by the Black Ferns Seven coach Allan Bunting and All Black Sevens coach Clark Laidlaw who led their teams to World Cup and Commonwealth Games gold. NZ Football Under 17 Women’s Football team coach Leon Birnie and New Zealander Joe Schmidt, who coached the Ireland rugby team, round out the shortlist.

The Sky Sport Emerging Talent award shortlist features five young athletes who had excellent achievements in 2018 including Josh Armit who won gold at the Youth Sailing World Championships and White Fern Amelia Kerr who made history hitting 232 not out against Ireland - the highest individual score ever posted in a women’s ODI.

Also in contention are swimmer Lewis Clareburt who claimed a bronze medal at the Commonwealth Games, Anna Leat who competed in the NZ Football Under 20 and Under 17 Football Ferns teams and shot putter Maddison-Lee Wesche who won gold at the Under 20 IAAF World Championships.

The Halberg Awards judges reviewed a record 93 nominations to find the finalists list, recognising achievements in 2018 up to 30 November.

The winners will be announced at the 56th ISPS Handa Halberg Awards held on Thursday 21 February 2019 at Spark Arena in Auckland and televised live on SKY SPORT from 8.00pm.

“A record number of nominations provided the judges a challenging job to review and create the shortlist with a year that provided so many outstanding achievements.  We look forward to celebrating them on 21 February and crowning the supreme Halberg Award winner,” says Shelley McMeeken, Chief Executive of the Halberg Foundation.

The annual Awards is the major fundraiser for the Halberg Foundation, the charity set up by Olympic athletics champion Sir Murray Halberg (ONZ), which aims to enhance the lives of physically disabled young New Zealanders by enabling them to participate in sport and recreation.

The Halberg Foundation has a team of Advisers around the country who connect physically disabled young people to sport and recreation opportunities, deliver an inclusion training course on adapting physical activity and assist clubs, schools and organisations to provide inclusive events and programmes. The Foundation also hosts the Halberg Games – a national three-day sports competition for physically disabled young people.

The list of finalists for the 56th ISPS Handa Halberg Awards:

ISPS HandaTeam of the Year (Eligible for the supreme Halberg Award)

About the Halberg Awards

Named after Olympic champion Sir Murray Halberg (ONZ), the Halberg Awards is the country's pre-eminent event to honour and celebrate New Zealand sporting excellence. It also provides the Halberg Foundation with a flagship fundraising opportunity for Sir Murray's charity, which aims to enhance the lives of physically disabled New Zealanders by enabling them to participate in sport and recreation.  For more information go to www.halbergawards.co.nz. 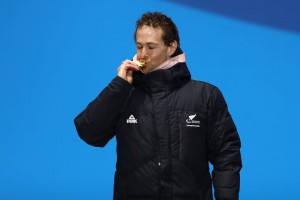