New Zealand freeskier Janina Kuzma (Wanaka) could not have asked for a better start to her northern hemisphere season with a win in halfpipe at the Copper Mountain Grand Prix in Colorado, USA today. Janina also topped qualifying rounds on Wednesday (US time) against a strong international field which included the silver and bronze medallists for women’s freeski halfpipe at the Olympic Winter Games in Sochi, Ayana Onozuka (Japan) and Marie Martinod (France).

Snow Sports NZ Head Park and Pipe Coach, Tom Willmott says the competition marks a solid start to the season for the Cardrona NZ Park and Pipe team and has seen Janina carry through the high level of execution and technical difficulty which earned her fifth place in Sochi.

In a new format, competitors had three, rather than two runs to put down their highest scoring run. For the Kiwi the extra run made no odds, the win already in the bag with her second run scores in both qualifying and finals. Not to waste the victory run, however, Janina still decided to go big and throw down a new trick, a left 900, for the first time in competition.

“I’m over the moon,” commented Janina after the competition. “I wanted to put down a new competition run, I did that and I’m really amped. Qualifiers were the hardest part but today there was a really good vibe. I was nervous to start and it showed in my first run but everything came together for the second run.”

The Copper Grand Prix is the first stop in the 2015 Visa U.S Freeskiing Grand Prix which is classified as a World Cup event by the International Ski Federation (FIS) and a platinum level event by the Association of Freeskiing Professionals (AFP).

Second place in today’s halfpipe competition went to the USA’s Devin Logan, who was the silver medallist for women’s freeski slopestyle in Sochi. Ayana Onozuka rounded out the podium in third.

Fellow Olympians Beau-James and Byron Wells were also back in competition at Copper Mountain with Byron placing eighth in finals and Beau-James finishing sixth in his qualifying heat to miss out on finals by one place. For Byron the result marks an encouraging return to competition following a training injury sustained in Sochi which saw him miss out on competing at the Games.

Coach Bruce Wells says that Byron met his goal to land his competition run and will now focus on refining execution and increasing amplitude.

Janina, Byron and Beau-James will now turn their attention to the Dew Tour Mountain Championships which take place in Colorado from 11-14 December. 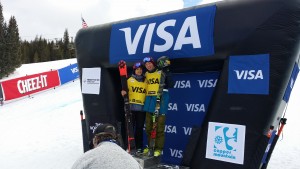