Finn Bilous has earned his second Winter Youth Olympic Games medal in Lillehammer, Norway with a bronze in freeski slopestyle.

The freeski event was originally scheduled for Saturday but with bad weather in the forecast competition was brought forward to Friday afternoon, immediately after the snowboard slopestyle event.

While the snowboarders had struggled with foggy conditions and reduced visibility on course in the morning, the freeskiers were treated to clear skies and sunshine. However, a slow running course still proved a problem and the skiers had to work hard for the speed needed to land technical tricks.

Finn came out of the start gate looking like he meant business and landed a clean run incorporating a stylish double cork 1080 for a score of 86.00. On the first run only the Norwegian skier Birk Ruud could best Bilous’ score, pushing through to the top spot with 89.20 points.

At the end of round one, Ruud sat top of the leader table, Bilous second and Alexander Hall of the USA in third.

Neither Ruud nor Bilous could improve their scores on the second run but were not threatened for their medal spots until Alexander Hall took to the course as the very last competitor. The American put together an impressive run and lifted his score from 83.20 to 87.40, leapfrogging him into the silver medal spot and pushing Finn Bilous back into bronze.

Bilous won silver in freeski halfpipe earlier in the week.

Competitors were challenged by a slow running course and fog reducing visibility on the top features. Rakai Tait was the first of the Kiwis to drop into the course, charging his way all the way to the final jump where he struggled for speed and knuckled the landing.

Tiarn Collins got his first run down but not with the clean trick execution he needed to be in contention for the medals. An over spin and hand down on the first jump left him with a score of 65.60 and seventh place after round one.

On to run two and Rakai came charging out of the gate ready to tidy up his run but a bobble on the first rail put paid to a high score.

Tiarn had a nervous wait for his second run.

“I was feeling some pressure. I just wanted to land the run I’d come here to land,” Tiarn explains.

The planned run included a 1080 on the final jump and would be key to lifting the Kiwi’s score.

With the fog lifting and sunshine on course at last, Tiarn made a confident start to his second run. Cleaning up his trick execution, he stomped his tricks top to bottom and signed off with the safely landed 1080 on the final hit.

A score of 86.25 put him into the bronze medal position but only briefly. Rene Rinnekangas (FIN) followed close behind with a score of 87.75 pushing the Kiwi back into fourth.

Alpine ski racer Jackson Rich was also in competition in Lillehammer today. After completing his first run he posted a DNF on run two of the Slalom.

“Training leading up to the race went really well and I was feeling confident,” he reports. “I had a plan in mind and felt very ready to send it. However, as I went down the course I kept making big mistakes that cost me a lot of time.

“I went up for my second run and tried to take my mind away from the first run and refocus! I started off strong but then made a big mistake at speed and couldn't recover quickly enough.”

While Rich described his final day of competition as “disappointing” he said “I've loved the Games, it’s been the best experience of my life. It was great to see we're I'm at on the world stage and it's really motivating for me to keep striving and getting faster!” 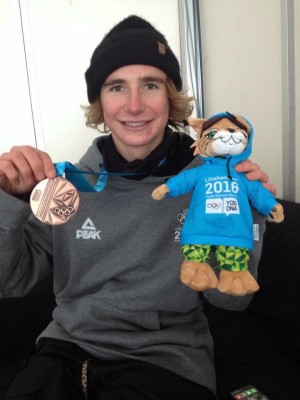