16-year-old ski racer Alice Robinson achieved a solid 35th placing in the women’s Giant Slalom, a result in line with her current ranking on the world stage.

The teenager was disappointed to be sitting outside the top 30, in 37th place after her first run.

“I think maybe I was trying a bit too hard to go full throttle and not thinking enough above the technical aspect. I was paying too much attention to going as fast as I could instead of being tactically smart,” she explained.

However, the two-hour break between runs gave her time to reset.

“After the first run, I knew I could ski a lot better and it was about having to re-evaluate that and focus on what I was doing and skiing well rather than the result that was going to come out of it.”

The tactic worked and Robinson achieved a faster second run, improving her final placing to 35th.

“It’s a good experience and will make me a bit stronger in the long run. In another four years I’ll be older and more experienced and hopefully I can be higher up in the standings.”

Snowboard cross racer Duncan Campbell finished his day in 37th place. The seeding rounds took place in the morning with competitors racing individually and aiming to record a top 24-time to take them straight to finals.

Duncan was seeded 32nd after run one and then fell on his second seeding run and recorded a DNF. His finals heat of six included some of the top ranked riders but he started off well before a few tactical errors saw him drop back.

“It was a super close race, there was so much passing back and forth. For the first three quarters of the race I was in a really good position and going well. I made one small mistake on turn four and went a little high to conserve my speed and the other racers ducked in on the inside. I tried to pass them again but it was too slow and I couldn’t make it up. 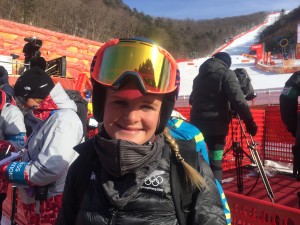