Corey Peters in the Medals at PyeongChang 2018 Test Event

PyeongChang, Korea (16 March 2017) – With just under one year to go until the 2018 Paralympic Winter Games get underway in South Korea, New Zealand sit-skier Corey Peters (New Plymouth) has claimed a silver medal at the test event currently being held in PyeongChang. The test event also doubles as The World Para Alpine Skiing and World Para Snowboard World Cup Finals.

The event, which began on Saturday 11 March, has brought both highs and lows for the New Zealand athletes. Peters was the fastest skier on course in Saturday’s Downhill training and looked set to claim victory on race day (Sunday), recording the fastest time splits all the way through the course, before hitting a bump and skidding out just three gates from the finish line. Team mate Adam Hall also recorded a DNF in the men’s standing Downhill.

Disappointed by the day’s race but with a strong season of results already behind him, Peters will still finish the season ranked second in the world for men’s Downhill in the sitting category.

After a day’s rest, the skiers were back in action on Tuesday (14 March) but softening afternoon snow conditions forced organisers to change to a Super-G rather than a Super-Combined (one run of Super-G, one run of Slalom). The Kiwis couldn’t find the pace they were after with Hall finishing 16th in the standing category and Peters 10th in sitting category.

With a second Super-G race scheduled for Wednesday, the New Zealand team had another chance to up the ante.

“I wanted to make amends today by attacking the hill and the course with much more controlled aggression,” explains Corey Peters.

He did just that, skiing to a one and a half second lead over the rest of the field before a surge from Dutch teenager Jeroen Kampschreur saw him take the win 0.86 seconds ahead of New Zealand’s Corey Peters in second. Andrew Kurka finished third in the race and grabbed the men’s sitting crystal globe by a narrow margin. Kampschreur secured second and Peters third in the Super-G World Cup rankings.

The giant slalom crystal globes will be the next to be decided on Friday (17 March), followed by slalom on Saturday (18 March). 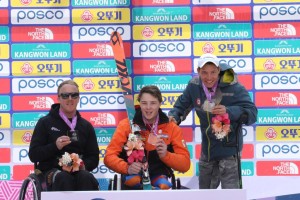