Sit skier Corey Peters well and truly left it all out there on the slopes of the Jeongseon Alpine Centre in PyeongChang tonight, smashing out a fantastic second run to deliver a combined time of 2:20.23 in the two-run Men’s Giant Slalom Sitting event. This wasn’t however enough to replicate his silver medal success in the same event four years ago at the Sochi 2014 Paralympic Winter Games, with Peters finishing 10th fastest overall, 6.78s behind Jesper Pedersen (Norway), who won convincingly in a combined time of 2:13.45. Tyler Walker (USA) took the silver with Igor Sikorski (Poland) in bronze.

Peters said: “Once again I just skied a little bit safe and conservatively. Particularly with a two run event like this you can’t really afford to hold back in the first run. I just had too much time to make up in the second run. Definitely a lot more proud of the second run and I attacked it a lot more. But like I said there was just too much of a margin to make up.”

When asked how he felt about the bronze medal he won on the first day of the PyeongChang 2018 Paralympic Winter Games, the first for the New Zealand Paralympic Team he said: “I’m pretty stoked that I managed to get the bronze medal on day one, certainly proud of that first day in the downhill. All and all it has been another learning experience and we can move forward from here and keep building.”

He continued: “So that’s my events all done for the Games so I can relax a little bit and come and support Carl in the Banked Slalom on Friday and Adam in the Slalom on Saturday. Hopefully we can pick up another two medals in the final two events for the NZ Paralympic Team.”

Earlier today, Peters began his campaign to retain or better his Sochi 2014 silver medal at PyeongChang 2018. He set the 12th fastest time of 1:11.07 from amongst a 37-strong field in the first run of the event. With the disqualification of world no 1 Jeroen Kampschreur (Netherlands) and 11 DNFs in this same run, including Andrew Kurka (US) and Taiki Morii (Japan), gold and silver medallists ahead of Peters’ bronze in the Men’s Downhill Sitting on Saturday, Peters’ went into the second run with a strong outside chance of a medal. It was not to be however, moving up two places to finish in 10th overall, doing well to survive a bumpy and challenging course which served up a further 6 DNFs.

This is Peters’ last event at the PyeongChang 2018 Paralympic Winter and he will return to New Zealand triumphant, with a fantastic bronze medal won in Saturday’s Men’s Downhill Sitting event.

New Zealand Paralympians will not be competing on 15 March 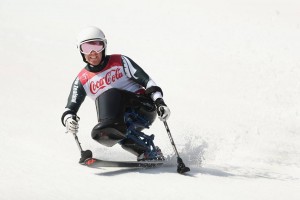