Aspen, USA (4 March 2016) – NZ snowboarder Carlos Garcia Knight (Christchurch) says his fourth place finish in slopestyle at the Burton US Open in Aspen today is “like a dream” and he is “beyond stoked”.

The competition, now in its 34th year, is one of the most prestigious on the international snowboard calendar. Every year it attracts a superstar line up, including the likes of two-time Olympic gold medallist Shaun White, with athletes coming to compete not only for a handsome prize purse, but to push trick progression to the next level.

Bad weather led to the cancellation of qualifying rounds on Wednesday (US time) and meant that finals was an all-or-nothing affair for the 31 riders today.

For first-time Burton Open competitor Garcia Knight the game plan was simply to put together a solid run top to bottom and make the most of every feature on a very creative course.

“This is such an historic event and the course is so creative I just wanted make the most of that and put down a run to be proud of,” he explains.

It took him two goes. The first run went well until the second jump when he landed too deep from the switch back 12, over rotated and caught the toe edge of his board sending himself into an unintentional flip.

No matter for the young Kiwi who knew he still had a second run up his sleeve.

“It actually boosted my confidence because I knew exactly what I had to do to tweak the landing and get it down clean. We train to know exactly how to change those small details.”

His level headed approach paid off and the second run went just as planned, Garcia Knight laying down a well-crafted run top to bottom and earning high scores on almost every feature. His overall score of 80.65 put him just fractionally behind third place-finisher Sebastien Toutant (CA) on 80.95. Kyle Mack earned the win with a score of 89.75 and Eric Beauchmin finished second with a score of 83.50.

New Zealand’s top female snowboarder, Christy Prior, had to withdraw from the women’s slopestyle finals today after suffering two sprained ankles in training. She expects to be back training on snow very soon.

Up-and-coming New Zealand rider Fletcher Craig (Te Awamutu) earned a start in the men’s halfpipe semi-finals yesterday after finishing on the podium at the invitational Burton Open Junior Jam. The 14 years-old was “ecstatic” with his third place in the junior event especially after landing a backside seven for the first time in competition.

He finished 30th in the elite halfpipe competition held yesterday. 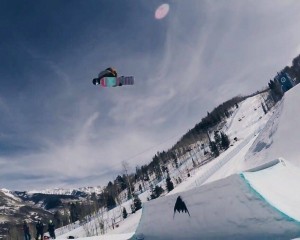