Tarvisio, Italy (23 January 2017) –More than 100 of the world’s best skiers from 30 countries have arrived in Tarvisio, Italy, for the 2017 World Para Alpine Skiing Championships which began with the Opening Ceremony on Sunday (22 January). New Zealand’s Adam Hall (Wanaka) will compete in the men’s standing events and Corey Peters (New Plymouth) in the sitting events.

The Cardrona NZ Para Alpine Ski Team members have recently competed at World Cups in Austria and Slovenia and, with just over one year to go until the PyeongChang 2018 Paralympic Winter Games, are well prepared to compete against the world’s best.

“We’ve had some very tight and exciting racing over the last couple of weeks since arriving in Europe,” explains Adam. “Innerkrems (Austria) had some challenges with the weather being pretty windy which in turn meant a mixed bag of lowered starts and shorter races than the World Cup norm and a cancelled race.

“The last couple of days again meant for tight racing in Kranjska Gora (Slovenia) where I finished in fourth place in both slaloms, keeping things exciting. In those races I was third and second after the first run and each race to this point has been decided by hundredths and tenths of seconds.

“The World Cups have given me a chance to tinker and dial in a few things going into this next week. I can’t wait for it to all begin!”

Corey Peters claimed his first world titles in super-G and downhill two years ago in Panorama, Canada, and is focused on defending them.

Two days of downhill training will start today (Monday 23 January) before the first medals will be contested in the discipline on Wednesday (25 January).

Full live coverage, the competition schedule and live results can be found at www.tarvisio2017.com. 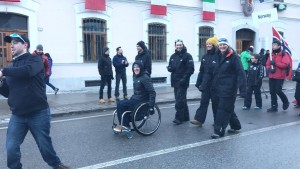