At the latest stop in Park City the team’s performance was highlighted by Janina Kuzma’s fifth place finish in the halfpipe.  Janina’s trademark consistency paid off in qualifying where she placed fourth.  With a training day before finals Janina made the most of the one-hour session perfecting the elusive grab hold on her left flair to improve her execution and challenge for a spot on the podium.

Finals day, great weather and a star studded field meant that she would have her work cut out to achieve a podium finish – it was time to step up.  Janina dropped in for her first run of three and achieved the run she had been working on, executing it well and with improved amplitude for qualifying.  There was further room for improvement - the score of 74.6 had her in fifth place.

Replacing the first-hit 540 with a first-hit 720 was the tactic to impress the judges on run two and Janina landed the run but without the same level of amplitude as her first: her score did not improve.

In her third run, Janina reverted to the original sequence deciding to send it as big as she could.  Things started off well with a 9.5 foot left 540, but a lack of pop on her second hit meant she got close to hip-checking.  Janina completed the run with an overall amplitude personal best for that sequence but ultimately it was not enough to achieve the outcome goal of a podium finish.

Superb skiing from the finals field ended up with a repeat of the Sochi Olympic podium: USA’s Maddie Bowman taking gold, Japan’s Ayana Onazuka taking silver and France’s Marie Marthinod taking bronze.  Janina also repeated her fifth place finish from Sochi, and knows there is hard work and changes to be made to close the gap to the top.

On the men’s side, Byron Wells was the top placed Kiwi finishing in 12th position with an uncharacteristic butt check on a last-hit deep landing of what would otherwise looked promising as a top-5 qualifying run.  Young guns Miguel Porteous and Finn Bilous (both aged 16), skied well at the elite level demonstrating their progression over the past 12 months in particular to finish 15th and 17th respectively.

The Cardrona NZ Park & Pipe team take a micro break for the next few days, before the action continues with Snowboard and Freeski athletes competing at the inaugural Boston Big Air.  Freeski and Snowboard Slopestyle athletes will converge on the 2018 Olympic venue in South Korea mid-Feb for their Olympic test event and World Cup while the Halfpipe athletes' next major event is the European X-Games in Oslo at the end of the month.

With five major event podium finishes after five events already in the bag and at the halfway stage of the season, matching last year’s overall medal haul; the team are intent on getting back on top and finishing the second half of the season in style. 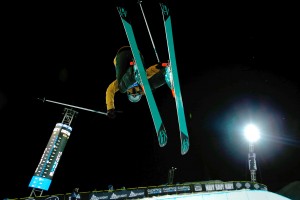