Kiwi Alpine ski racer Alice Robinson has finished in 9th place overnight at the FIS World Cup Giant Slalom held in Kranjska Gora, Slovenia. This is the first top ten World Cup result Robinson has achieved since she won this very race just over a year ago.

Robinson took a more conservative approach to her first run down the hard and icy course and finished run one sitting in 9th position, +1.53 behind run one leader Mikaela Shiffrin (USA).

“I just wanted to be a bit cleaner [on run one], I had a lot of mistakes yesterday, I think I did that, but I wasn’t pushing enough, not aggressive enough”.

Robinson skied a solid second run, looking strong and in control as she ripped down the course. She explained that the plan was to “attack more on the second run and rip some normal turns”.

Robinson finished in 9th place, +2.32 seconds behind winner Marta Bassino (ITA) who was ecstatic to take the World Cup win two days in a row. Michelle Gisin (SUI) was on the podium once again, today in second place and Meta Hrovat (SLO) rounded out the podium in third.

After a tough season, a top ten result today is a crucial steppingstone to help Robinson get back on top of the World Cup podium. “I think it will help build my confidence and I have still got a lot of races to go this season”.

Referring to yesterday’s 14th place result Robinson explained “Today was very tough…I made a lot of significant mistakes that really cost me time wise...I’m lacking some confidence to let it rip and that’s the plan tomorrow”.

Fellow Kiwi Piera Hudson was unable to start tonight due to hyper extending her knee and spraining her lateral ligament in her right knee at yesterday’s World Cup. 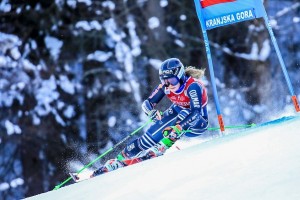