Hall who is ranked fourth in the world in the slalom standing category won back-to-back slalom golds at the Games in 2013, and did not disappoint fans today when he was the clear winner in both runs, clocking 38.13 and 36.10 for an overall time of 1.14.23.

Racing on the Out Wide course at the Rocky Gully Race Arena, Hall headed off Winter Games NZ 2013 slalom silver and bronze medallist Mitchell Gourley of Australia, who recorded a combined time of 1.18.23, just cutting out third place getter US Sochi paralympian James Stanton in 1.18.51.

Hall was upbeat about his win. “This is my fourth Winter Games NZ and it’s been great to get the title again. This year the conditions have been really good and the course was great. The second run was a bit faster and a bit more open.”

New Zealand’s Corey Peters, ranked 15th in the world in the slalom sitting category, chased American Tyler Walker and world number 12 hard, but had to be content with second place in 1.17.71, when Walker put down the two fastest runs for a combined time of 1.14.80.

Peters who won silver in giant slalom at the Sochi Paralympics said slalom is still a work in progress for him. While happy to achieve second place ahead of Korean Sang Min Han, who recorded 1.19.87, he said mistakes in both runs cost him. “You can’t afford to make mistakes like that.”

Walker, who made headlines with a serious crash during the Sochi Paralympics downhill which saw him airlifted and hospitalised was pleased overall with his gold medal win today, a repeat of his Winter Games NZ 2013 performance.

“I love being back at Coronet Peak and it’s nice to have a proper winter in the middle of my summer particularly with the good quality snow that’s here at the moment.”

The men’s visually impaired category was won by young Australian Patrick Jensen and his guide Kirsty O’Sullivan completing the course in a combined time of 1.51.80.

In the women’s visually impaired category Korean paralympian Jae Rim Yang and her guide Un So Ri Ko took top honours in 1.33.99 ahead of Danielle Umstead of the United States who scored 1.39.44. Umstead and her husband and guide Robert won bronze in the Super Combined event at the Sochi Paralympics.

In the women’s standing category Melanie Schwartz of the United States, ranked 11th in the world, took first place on the podium in 1.40.36 heading off team mate and world number three Stephanie Jallen, who clocked 1.48.30 after falling and having to take a hike in her first run.

Jallen, who was a bronze medallist in Super G and Super Combined at Sochi, recorded a second run time of 41.49 which was the fastest run of the day for the category.

US Paralympian Laurie Stephens, number five in the world for women’s sitting slalom, had the field to herself to win gold, scoring a creditable 1.31.18 result.

“The athletes loved today’s course which was not quite as steep as in 2013. The snow conditions were also fantastic and they were able to come in with lots of speed.” 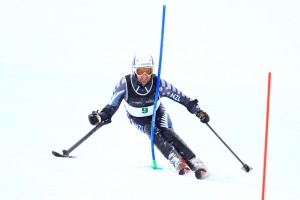