Sochi, Russia (22 February 2014) - Adam Barwood had the honour of rounding out the New Zealand Olympic winter team’s 2014 campaign when he competed in the men’s Slalom at the Rosa Khutor Alpine Centre on Saturday. The day would bring several challenges but for Adam Barwood it would end with a personal best result and one of the best results for a New Zealand ski racer at a Winter Olympics.

Weather and snow conditions were spring-like and event organisers had been working hard over night in an attempt to create a hard and consistent race track for the 117 skiers. Adam would start in position 63.

While Slalom is Adam’s preferred discipline, the first time Olympian was in no doubt that the challenge ahead of him would be one of the greatest of his career so far.

The high-technical demands of a Slalom course often result in a large number of competitors not completing their runs. Slalom gates are set closer together than in any other ski racing discipline and the skier must be able to manoeuvre quickly and accurately between them. The event is contested over two runs with the winner being the person with the fastest combined time. If a skier is unable to complete their first run they do not get a second run start.

Following a strong showing in the Giant Slalom earlier in the week when he finished 44th from a start position of 50th, Adam was targeting a finish in the top half of the field. He would need a steady, fluid first run, as close to error-free as possible in order to meet his performance goal.

With several of the top ranked skiers, including former Olympic gold medallists, crashing out on their first run, the pressure was on the New Zealander to get safely down the steep and challenging course. He chose not to be distracted by others’ mistakes and to keep focus on his own performance.

“It didn’t really cross my mind. In ski racing there’s always a chance of something going wrong but it wasn’t too bad.”

Finding a steady rhythm and keeping his composure Adam crossed the finish line in a time of 54:21s in 50th position and 7.51 seconds behind the race leader. He would be one of only 77 competitors to make a second run start.

Following a course re-set and with night time having descended in Sochi the second run got underway. The skiers with the fastest 30 times in run one started first, in reverse order followed by the rest of the field.

Difficult snow conditions and a tricky course set once again got the better of many skiers. Several skiers who had missed a gate would opt for the quick hike back up to successfully pass it before completing the course and getting an official result.

The course almost got the better of Adam Barwood who looked to be in serious trouble early in the top section. However, determined to finish and managing the recovery after each stumble, Adam held on until the last and finished in 1:56.18. His final placing of 25th from a start position of 63 marked a personal best and far exceeded his own expectations.

“I was really just trying to get down there,” he explained after the race.” It was pretty tough but I survived it.

“I’m definitely happy to have made it.”

Of the 117 skiers who started the course only 45 finished.

“He just fought through to the finish.

“He didn’t give up. The snow conditions aren’t the best at the moment and the course set is really challenging and that’s what it finds, it finds the best out of people. The Olympics are about finding the best and Adam showed that tonight.”

Adam’s result is the tenth best result for a New Zealand ski racer at the Olympics and the best since Claudia Riegler’s 11th place finish in Slalom in 2002. 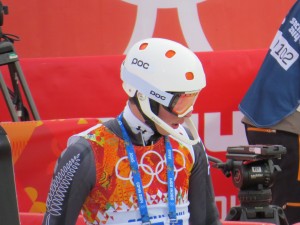