Barwood was also the top placed New Zealand male in yesterday’s Giant Slalom competition and held the 2012 NZ Alpine National Championship title. He finished his first run of the Slalom today sitting in 12th place but improved to eighth place with his second run and a time of 1:36:55.

Nick Prebble was the second placed New Zealander, finishing his day in 15th place overall with Tai Juneau just behind in 18th place.

Harriet Miller-Brown finished her two runs with an overall time of 1:38:66, making her the fifteenth placed woman and top New Zealander. Piera Hudson was just behind her in 16th place with a time of 1:39:81.

The international field was represented by nations as diverse as USA, Russia, Uzbekistan, Sweden, Great Britain and Korea but Austrian racers were the force to be reckoned with today. Michael Matt won the men’s Slalom (1:32:62), improving on yesterday’s result in which he placed seventh overall having initially led the field with his first run.

In the women’s Slalom Austrian competitors claimed all of the top five placings with Eva-Maria Brem first with a time of 1:30:24, Hannah Koeck second in 1:30:33 and Christina Ager third in 1:30:42. 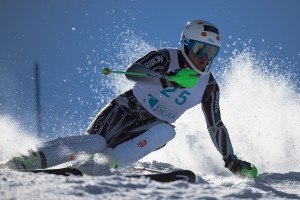