The 2013 event saw over 200 skiers and snowboarders between the ages of five and 18 compete in a range of disciplines including dual giant slalom, ski and boarder cross, big mountain, halfpipe and slopestyle at Cardrona Alpine Resort.

Snow Sports NZ’s Adam Dooney thanked the sponsors of the 2013 Junior Nationals without whom the week’s events would not have been possible. He also thanked the events crew at Cardrona Alpine Resort who work hard behind the scenes, often beginning their working day at 4am, to ensure the smooth running of competition.

Attendees of the Junior Nationals prize giving ceremony also had the opportunity to win spot prizes including skis and snowboards. Jack Jeffs was the lucky winner of a pair of Smith goggles in the ‘Place it, post it, shoot it’ Facebook and Instagram competition. Entrants were asked to take a photo of themselves holding a 2013 Junior Nationals poster in the most interesting place possible.

The prize giving ceremony closed with a video of the official NZ Olympic song performed by Hollie Smith and the Royal New Zealand Navy Band.

Feel free to embed videos or download and upload onto your own video player. Please credit Wanaka TV.

Images are for editorial use only and must be credited to: Wanaka TV. 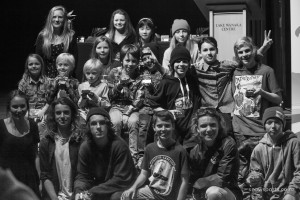