Zoi Sadowski-Synnott, at just 19 years old, has claimed the Snowboard Slopestyle silver medal at the prestigious X Games in Aspen this morning. It is the fourth X Games medal of Sadowski-Synnott’s career.

X Games is widely regarded within the industry as the pinnacle event of the season, with only the top athletes in the world offered an exclusive invite.

Sadowski-Synnott explained that “practice was going well but not the best, I was struggling with speed between the first and second kicker. Going into the first run, I didn’t feel totally prepared but was ready to put down my back-to-back 900’s. In the first two runs I was struggling with speed and not pulling it all together. On the third run I pulled it back to land a run and then put it all together on the final run.”

Her three-part rail section consisted of a 50/50 gap to back board, front lip to switch and a switch front blunt 270 out on the flat bar. In the jump section, consisting of two traditional jumps and two (backside and frontside) transition features, Sadowski-Synnott went huge, performing a switch back 900 mute grab into a back 900 melon grab then into a cab under flip 540 and a crippler on the transition features.

Jamie Anderson (USA) took the gold medal with her effortless style and solid landings and Laurie Blouin (CAN) rounded out the podium with the bronze medal.

“At X Games there is definitely the feeling in the air that this is the biggest competition of the season and this is where you want to do your best and after coming just behind Jamie in LAAX I was giving it everything I had to come on top. I am still stoked with second place though.”Sadowski-Synnott explained.

Sadowski-Synnott has also been invited to compete in the X Games Snowboard Big Air event which is taking place at 9.45am Sunday morning (NZT). “I am feeling good about the big air, the jump is nice, after today there will be some athletes who missed out [on the podium] today who will be going for it tomorrow. It will be a really good show.” 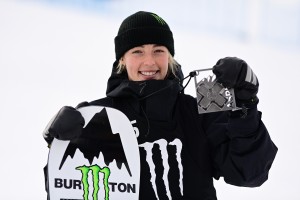