Murphy, who is a below the knee amputee, has enjoyed a series of podium finishes during the 2012-2013 northern hemisphere season but today was his first win at World Cup level. Murphy claimed the bronze medal earlier this month at a World Cup event in Sochi, Russia which doubled as a test event for the 2014 Winter Paralympic Games.

Para-snowboarding has been added to the Winter Paralympic roster for the first time in 2014 and Murphy has his sights set on a medal. Murphy, and his coach Adam Dooney, are delighted by today’s result.

“All the hard work that we have been doing is showing,” says Murphy.  “We had a clear focus on what we needed to work on since Sochi, tiding up those areas has clearly paid off.”

“I was ready to give it 110% in today’s World Cup at Big White Resort BC, Canada. I have felt strong and fast all week in training and today it all just came together.”

Murphy posted the fastest times of the day to take a convincing win by more than three seconds over second placed Evan Strong (USA) and Keith Gable (USA) in third.

“I can’t get the smile off my face, not only to win by a good margin but this win is my first World Cup win ever!  I have had lots of seconds and third over the past six years of racing World Cups but today was my first to stand at the top of the podium.”

“It was an awesome day of racing and Carl was on fire,” adds coach Dooney. “Carl has been working hard on a few aspects of his riding since the European events and has also made changes with his approach to race day; it is great to see it all come together and especially at his pinnacle event for the year.

“This event is a double header and we are looking forward to getting out there again tomorrow.” 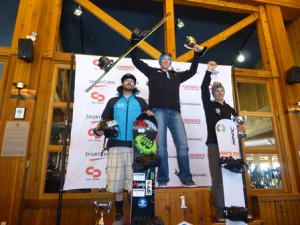