A total of eight world cups will be held as part of the Winter Games programme, including Freeski and snowboard half pipe, slopestyle and snowboard cross.  This is the first time IPC sanctioned World Cups have been held in New Zealand for adaptive skiing and para-snowboarding. The IPC Alpine Slalom, Giant Slalom and Para Snowboard Cross will be qualification events for the Paralympic Games to be held in Sochi, Russia in 2014.

The events will encourage the world’s best adaptive skiers and para-snowboarders to travel to New Zealand to compete for points and for athletes such as Adam Hall, currently ranked number one in world slalom, there’s the distinct advantage of racing “in your own backyard’.

Jane Stevens, Adaptive Manager for Snow Sports NZ, is delighted by the IPC’s decision to sanction World Cup events at the 2013 Winter Games NZ and looks on this as the perfect opportunity to showcases the sports to up-and-coming athletes.

Snow Sports NZ’s Adam Dooney, Director of Coach and Athlete Development and coach to New Zealand para-snowboarder Carl Murphy, also sees this as a significant step for adaptive snow sports. The 2012 Paralympics in London has become a milestone for disabled sports with athletes enjoying unprecedented levels of coverage in international media. Adam is hopeful that the World Cup events at Winter Games NZ will attract attention for both our able-bodied and adaptive athletes as they begin the journey to qualification for Sochi 2014.

While alpine skiing was one of the foundation sports at the first Winter Paralympics in 1976 with slalom and giant slalom events being held, para-snowboarding will be on the programme for the first time in 2014. The sport provides a competitive outlet for hundreds of athletes around the world with physical disabilities such as spinal injury, cerebral palsy, amputation, and visual impairments. With World Cup para-snowboard events being held in New Zealand and the inclusion of the sport at the Paralympics in Sochi in 2014 para-snowboarding is likely to gain more and more participants.

New Zealand’s Carl Murphy and Byron Raubenheimer will both be looking to gain valuable qualification points at the Para Snowboard Cross World Cup. Carl is currently ranked number two in the world. During the northern hemisphere season he earned a string of podium finishes including a silver at the Para-Snowboard World Championships. He also competed at the prestigious Winter X Games, where he finished in fourth place.

Having spent five long years battling for the inclusion of his sport in the Paralympic Games Carl is delighted that para-snowboarding will be showcased to the world at Sochi in 2014. The journey towards qualification is now underway and for Carl the announcement that a Para-Snowboard Cross World Cup event will be held at the Winter Games NZ programme in 2013 is particularly exciting.

“The qualification process (for the Paralympic Games) will be tough, so having a ‘home’ event is going to be very beneficial in terms of gaining points,” he said. “Riding my home field will make me more relaxed in my racing.”

Carl is focussed on his ultimate goal: “topping the podium” and sees the World Cup event as “a huge opportunity for me to show the world I’ve got what it takes to win gold at Sochi in 2014.” 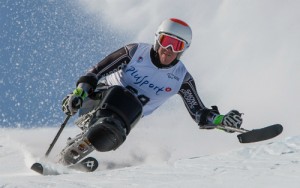