Wells Brothers Through to Finals on First day of Competition

Colorado, USA (9 December 2012) - The first stop of the 2013 The North Face Park and Pipe Open Series at Copper Mountain, Colorado has provided an exciting start to the season for New Zealand’s top freeskiers.

The competition runs over two days from 8-9 December and despite only being sanctioned as a Silver AFP (Association of Freeskiing Professionals) event and a FIS Continental Cup it has attracted the world’s best park and pipe skiers. With the Colorado ski areas badly in need of snow, halfpipe training opportunities have been limited and many national teams have used The North Face Park and Pipe Open Series event as a chance to train and prepare for the prestigious Dew Tour which begins on Monday.

“With all four Wells brothers competing together in the same event for the very first time, there were good odds that the Wells name would be featuring in the finals at The North Face Park & Pipe Open Series Halfpipe at Copper Mountain, Colorado.

“Byron “I’m Back” Wells blasted consistent and impressive runs to breeze through his qualifying heat in second place.   Beau-James put down a strong second run to also go through his heat in fourth, while an uncharacteristic bail from Jossi meant that he did not progress.

“Youngest brother Jackson sent the biggest air of his life first-hit in his second run boosting over 13.5 feet out of the halfpipe, although in the heavily stacked field did not make it through to the next round.

“Lyndon Sheehan had been riding well in training but a few wobbles at the bottom end of his run meant that he did not go through either.

“In the women’s event, Janina Kuzma demonstrated to her sponsors, The North Face, that she is a versatile skier who can compete at the elite level in both Big Mountain and Halfpipe events, landing a smooth and well executed first run to qualify for finals in fifth place.

Finals will see the performance bar rise and all of the Kiwi finalists gunning for top spots.   So far it’s been a strong start to the 2012-13 Northern Hemisphere season and we hope to see this continue in tomorrow’s finals and on through next week’s Winter Dew Tour at Breckenridge.”

Image: Beau-James Wells in the qualifying round of the 2013 The North Face Park and Pipe Open Series at Copper Mountain, Colorado 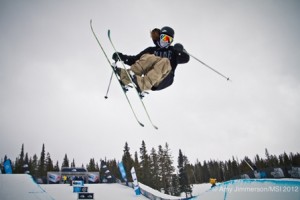 9 years ago
The North Face Park and Pipe Open Series