For the ski teams, first place went to Wanaka Primary School’s Pocket Rockets who also took out the Ski Connect Cup. The Cup is awarded to the top performing school team with an age penalty applied to race times to allow a fair competition between older and younger competitors.

Hawea Flat’s Fast & Furious placed second and Wanaka Primary Orange placed third in the ski teams’ category. “We Don’t Do Park” recorded the fastest overall time in this category but were not eligible to win a team medal because team members were not NZ Registered home schooled students based in the Upper Clutha or close surrounds.

The Upper Clutha Primary and Intermediate Schools Championships have grown to be a popular end of season event for local students largely thanks to the efforts and enthusiasm of outgoing Race Secretary Kris Vollebregt. Kris took on the role in 2010 and set about reinvigorating the event with the aim of attracting 100+ competitors.

Suzy Gendall, who has taken over as Race Secretary this year explains that the objective of the event is to provide a fun and friendly competition environment in which the students can practise skills learned throughout the season and as part of their schools’ snow sports programmes.

With an emphasis on fun and participation the event attracts first time racers as well as some seasoned competitors. Racers are usually within the year three to eight school age with a handful of competent year two competitors. Organisers hope to see the event continue to grow in coming years with more schools in the Upper Clutha region entering teams.

The organisers would like to thank New World Wanaka, Cardrona Alpine Resort and Outside Sports for providing spot prizes and goody bags for the event. A big thank you also to all the volunteers who helped out on the day.

Photos from the day are available here www.smileysmtphoto.com and by contacting: [email protected] 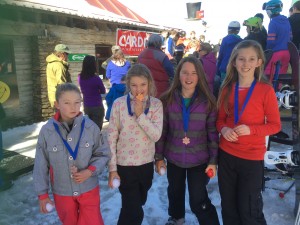