In developing a partnership, Treble Cone and Snow Sports NZ aim to provide support to the New Zealand Freeride Team that enhances their competitive success both at home and overseas.

New Zealand freeride athletes have a long and proud history of winning on the world stage. Hamish Acland (Wanaka), Sam Smoothy (Wanaka), Charlie Lyons (Christchurch) and Janina and Maria Kuzma (Wanaka) all achieved major international event podiums and Sam Lee (Wanaka) and Craig Murray (Wanaka) are now following closely in their tracks. Sam Lee finished sixth overall in his first season on the Freeride World Tour (FWT) earlier this year, while Craig Murray has taken a fast track to qualifying for the 2018 FWT after earning the Junior Ski European Championship title in 2016 and winning the 2017 Freeride Qualifying Tour.

“The mountains of New Zealand have a way of producing athletic, creative and aggressive freeride athletes, and our team is an excellent representation of that.  The level of talent is impressive, to say the least. We are really excited to have Treble Cone as the official resort partner for our team as it contains world-class freeride terrain for our athletes to train on.”

“With Treble Cone having some of the most incredible terrain in New Zealand it’s no surprise that excellent skiers and snowboarders are produced in this area. We are thrilled to be part of this new partnership with Snow Sports NZ, and to be the Official Resort Partner of the New Zealand Freeride Team. It is an opportunity to support those athletes who are already competing on the world stage as well as the junior athletes starting their careers,” says Jackie van der Voort, CEO, Treble Cone Ski Area.

Snow Sports NZ is pleased to name the following athletes to the New Zealand Freeride Team: 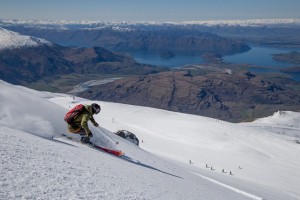