The series so far has included four Giant Slalom (GS) and four Slalom races held at Coronet Peak and Mt Hotham resort in Australia. The ANC Super-G and Super-Combined are scheduled to run at Mt Hutt on Tuesday 6 and Wednesday 7 September.

Willis Feasey (Twizel) has claimed the coveted yellow bib for the men’s Giant Slalom and Adam Barwood (Queenstown) for the Slalom. Australia’s Greta Small has been leading the charge for the home nations in the women’s field, earning the yellow jersey in GS and Slalom.

The yellow bib is awarded to the top performing Australian and New Zealand female and male competitors from the ANC series races held in Australia and New Zealand. The yellow bib allows the holder a top 31 start position on the Europa Cup and NorAm circuit for the northern hemisphere season.

“It’s a strong field with several racers in the top 30 on the World Cup circuit,” explained Willis Feasey. “It’s always good to test yourself against the best.”

For this week’s races at Coronet Peak all but the last of the women’s Slalom were minimum penalty races (6 FIS points), reflecting the high calibre of the field. New Zealand athletes Adam Barwood, Willis Feasey and Eliza Grigg all earned top 20 placings.

“I’m feeling pretty good about the results overall,” he said. “The first GS was frustrating, I was skiing fast until I came out, so I skied a little cautiously on the second day but still enough to get the title and that was the main goal.”

Adam Barwood finished 17th and 22nd in GS and 12th and 19th in Slalom at Coronet Peak. With two ninth place finishes in Slalom at the Mt Hotham races already in the bag, the yellow bib was secured.

The ANC races have provided some of New Zealand’s up and coming racers with a chance to benchmark themselves against top international athletes such as 2014-2015 Europa Cup overall champion Ricarda Haaser of Austria.

Team Hutt racer Georgia Bushell (Christchurch) enjoyed her first experience of ANC races, pleased to achieve her goal of making the top 30 flip in the Slalom, and “learning from the top girls in everything they do from their warm up, their attitude and their racing.” 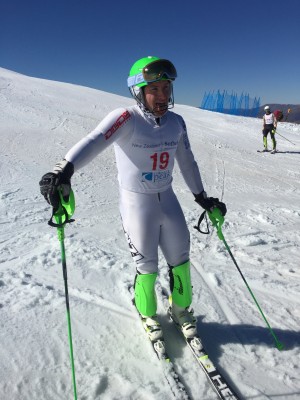