New Zealand snowboarder Tiarn Collins says he’s “stoked to be back in the mix” and “super happy” to start his season off with a finals result after qualifying second in his heat and finishing eighth in the finals of the snowboard Big Air World Cup in Modena, Italy overnight.

This is Tiarn’s first competition in six months after he sustained a shoulder injury during practice just days out from the Olympic Winter Games in February this year.

The first Northern Hemisphere event of the year, the Modena Skipass big air World Cup jump is a man-made structure of steel and snow standing 46m tall and 130m long, making it amongst the biggest ever constructed for World Cup competition.

Ready to take on the massive jump were the world’s best snowboarders, including the USA’s Chris Corning, who took the first World Cup win of the season at the Audi quattro Winter Games NZ in August, along with Japan’s Takeru Otsuka and Yutaro Miyazawa, Norway’s Mons Roisland, the USA’s Kyle Mack, all of whom have been on top-scoring form.

While not sufficiently recovered from injury to be able to compete on home snow at Cardrona in August, Tiarn looked more than ready to take on the world’s best today. A backside 1440 mute grab put him through to finals in second place behind Norway's Marcus Kleveland.

In the finals competition the combined scores of his backside 1440 and switch backside 1260 were enough for an eighth place finish.

This evening it will be the turn of the skiers to take to the Big Air jump, with NZ’s Finn Bilous hoping to back up his bronze medal-winning performance from the Winter Games NZ in August. Qualifications in Modena will begin at 9:30am local time (9:30pm NZT, Sunday) with finals happening under the lights at 17:00 CET (5:00am NZT, Monday). 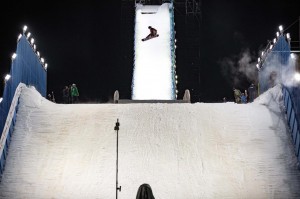