Tiarn Collins (Queenstown, 22) has won the FIS Snowboard Slopestyle World Cup overnight. This is Collins second World Cup win of his career and puts him in the top spot on the World Cup leader board with just one event to go for the 2021/22 season.

The course in Spindleruv Mlyn was a little different to what we usually see on the World Cup circuit, with just one rail feature at the top of the course and a second rail feature inserted halfway down between jumps.

Qualifying through to the finals second in his heat, Collins knew he would have to give it everything to land atop the podium in the 16-man final.

Sitting in sixth dropping into his second and final run Collins laced together a technical run that he executed to near perfection to the delight of the crowd cheering on from the bottom. The judges rewarded him with a 90.25, the only score in the 90s handed out today.

William Mathisen (SWE) and Luke Winkelmann (USA) rounded out the podium in second and third respectively.

The finals event of the FIS World Cup season will be going down next weekend in Silvaplana, Switzerland with Collins in action alongside other Kiwi Snowboard and Freeski athletes. 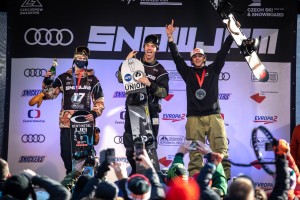