Nico Porteous, Zoi Sadowski-Synnott and Finn Bilous will all be competing in the finals of their respective disciplines at the Winter Dew Tour this weekend. Dew Tour is an invite only event and an USA Olympic Team qualifier, showcasing the best skiers and snowboarders in the world.

Nico, Zoi and Finn have all been named to the team to represent New Zealand at the 2022 Beijing Olympic Winter Games in February.

Snow Sports NZ halfpipe coach Tommy Pyatt said "Nico gave it his all today in really adverse weather conditions. Him and I are stoked to see it all come together and looking forward to putting on a good show in the finals on Sunday".

Finn Bilous was a first alternate for the Men’s Ski Slopestyle this morning, finding out just before the event started that he would be dropping in to compete. With fresh snow slowing down the jumps Finn had to think on his feet, changing up his run to adapt to the conditions. He scored a 76.75, putting him in 10th position, right on the bubble for finals.

Finn had a nerve-wracking wait at the bottom while the remaining 16 athletes made their way down the course to see if his score would hold up to allow him to clip his ticket to the finals.

“Having this be the first event in my season I’m really pumped to get through to the finals and think it is a good confidence booster given the season ahead with the Olympics coming up in February”.

Zoi Sadowski-Synnott, will be competing in the Women’s Snowboard Slopestyle on Sunday morning at 5am NZT. The stormy and windy weather in Colorado on the scheduled qualifications day resulted in a cancellation of qualifications, with all 15 women going straight into what will be an exciting three run final. 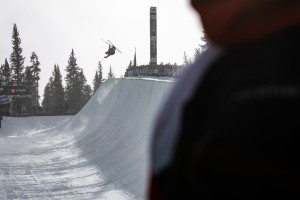