Following on from a silver medal win in yesterday’s race, Corey placed fourth in the men’s sitting class GS on day two of competition. An error on the first pitch of the technical course was enough to cost him the podium but the result was still enough for Corey to take third place on overall world cup standings for the men’s Giant Slalom sitting class.

“Today didn't go as planned with a couple of crucial mistakes which cost me a podium spot and left me with fourth place here in St Moritz at the World Cup finals,” explains Corey. “Good news is it was enough to secure third place in the Giant Slalom overall points.

“World Championships in Panorama, Canada is now the focus with 25 days to go. Time to work on minimising those mistakes and skiing cleaner and faster.”

The 2015 IPC Alpine Skiing World Championships in Panorama, Canada, will feature around 130 of the world's best skiers from 30 countries. 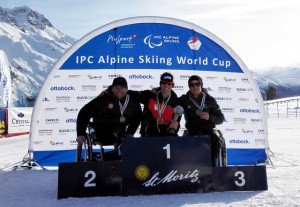