Eighty eight competitors competed across two qualifying heats with each skier given two runs to post their highest score. The top six skiers from each heat then progressed to finals along with the next four highest scorers for a total of 16 finalists.

Battling strong winds, Byron opted for a conservative but creative line and was rewarded with a score of 82.24 making him the top qualifier in his heat. Jackson Wells also put together a solid performance to earn a place in the top six and a crack at the finals.

With the wind still at full force and the course becoming increasingly icy, Byron put his many years of competition experience to good use and decided that a creative rail line rather than big jump tricks would once again be the key to his success come finals time.

“I know when to tone it back and not to risk it,” he explains. “With such a big field I also wanted to show the judges something different and be a little bit more creative.”

Starting with a lip 270 on the first rail, Byron then hit the wall ride with a five tail grab out, followed by a switch 270 transfer. He finished off the run with a switch right 7 and a switch left misty 900.

Byron finished in third place behind Willi Borm in first and Ben Smith in second. Jackson Wells was pleased to put together his best performance of the day in the finals to claim fourth place.

The Rev Tour is sanctioned by the International Ski Federation (FIS) and is an Association of Freeskiing Professionals (AFP) Silver level event. The Tour started in 2003 to bridge the gap from grassroots competition to the elite level. New Zealand was well represented in today’s competition by up and coming athletes looking to gain international competition experience. Also in action today were Finn Bilous (Wanaka) who finished 22nd, Harry Pettit (Queenstown) who finished 29th and Albert Todd (Auckland) who finished 67th. 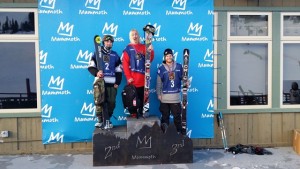